In Honor of John Hillman 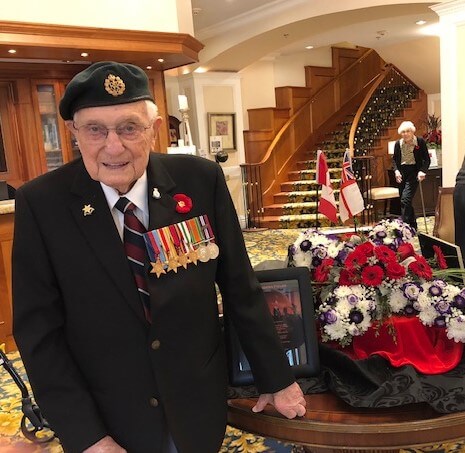 Born in 1919, in South Wales, UK, and now resident in Oak Bay at Carlton House, John Hillman served with the Royal Air Force in the Second World War, having joined the RAF in 1937.

Trained as a Wireless Operator, he was posted to France with the Air Advance Strike Force in August 1939.  He was fortunate to avoid capture during the German Blitz and returned to the UK via Brest, and the fortuitous presence of a Royal Navy destroyer, in June 1940.  During two years of service at home, he courted and married his wife Irene; they have been together for 78 years.  Irene now lives in nearby Glengarry Hospital.

In late 1942 John was posted to the Middle East, serving in the Western Desert, Palestine, Lebanon and Syria.  From there he joined a Dakota Squadron in Italy where he remained until 1944. Instead of returning home, as anticipated, he was sent to Burma with his squadron, where he remained until early 1946. He is a proud wearer of the Burma Star.

John will be participating in the Remembrance Day services at Carlton House, wearing his four WW 2 Campaign Medals: the 1939/1945 Star, the Africa Star, the Burma Star, the Defence Medal and War Medal which also carries the Bronze Oak Leaf denoting his Mention-in Despatches.

As Irene’s sister married an RCAF officer in 1941, the Hillmans have had a long and close relationship with Canada, settling here in Oak Bay in 1999.